Who is the victim?

Chris is a high-ranking social media-marketing director for a fortune 500 company. He was working directly with a senior executive, and meeting with her weekly. It was not going well. 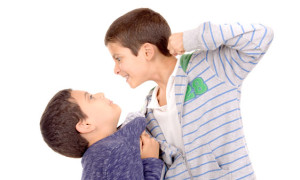 “It’s just one beating after another. I can’t stand the thought of next week’s meeting. She isn’t at all collaborative, and talks to me like I am a child. I can’t talk to anyone about it because the problem is coming from above. When she gets on a tirade, the mid-managers throw me and my team under the bus to protect their own asses. It’s just a mess.”

What is the problem?

Chris has a textbook bully on his hands. “While the corporate bully may not look or act like the playground thug, the victim’s response in either case is to hunker down and get out of the way.”

Here is the vicious cycle that gets set up:

“While the corporate bully may not look or act like the playground thug, the victim’s response in either case is to hunker down and get out of the way.”

It is a lose-lose situation. The boss and the company are not getting Chris’ best self, or his best work. The boss is unhappy at his lack of productivity. Chris is feeling nothing but oppression from above. Instead of a collaborative team effort, Chris is a passive spectator to his boss’ dictatorship. He’s a demoralized player on the team feeling isolated and stressed.

Why does it happen?

The most important question to ask is WHY does Chris have to deal with a bully at work at all?

It boils down to a single key idea. Corporate bullies are often operating out of their own personal blind spots.  Rarely do executives endeavor to strike fear in the hearts of their subordinates. I am not saying it never happens, but the days of “They don’t have to like me, they just have to respect me,” are rapidly fading from our collective psyches. More integrated practice models are coming to the managing forefront where individual participants collectively pursue goals and create product strategy. The idea that you don’t have time to collaborate with colleagues is simply no longer true.

Instead, what we find are people who are victims of their own success. Those very same characteristics that enable leaders to rise to the top of their field (e.g. decisive nature, forward thinking, declarative, self directed, self-reliant, fearless, and competitive) can ultimately hurt them and interfere with their ability to effectively lead.

Are YOU a bully?

If this pattern seems familiar to you, you are not alone. Unfortunately, the list of executives whose dictatorial style of leadership ran their businesses into the ground is long:

Your team may see you as a bully. Remember, perception is reality in this instance. If your team FEELS bullied, your intentions are irrelevant.

Bullying also happens on a smaller scale. I recently came across a checklist that can help you determine if you fall into this category.

Do you agree or disagree with the following questions?

If you agreed with 5 or more of these statements, your team may see you as a bully. Remember, perception is reality in this instance. If your team FEELS bullied, your intentions are irrelevant.

How do you avoid bullying?

Change is hard. You have to start by assuming you could be perceived as a bully.

NetApp’s Dan Warmenhoven calls his process for ‘bully prevention’ the five “C’s”. I like it. And it works because if you can systematize your accountability you will generally get better results.

My client Chris is living proof that a bullying leadership style is not ideal, productive, or effective. I have no doubt that his boss wants to be ‘successful.’ Most leaders want to do right by their companies, right by their employees, and right by themselves.

Being the leader can be an isolated and solitary experience. But it does not have to be. Ultimately, the burden of final decision-making falls to you as the leader. The trick is to implement those decisions without leaving a pile of bullied victims in your wake.